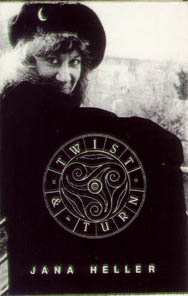 Twist and Turn was Jana's second privately produced recording to be released in the U.K. The cassette was released in 1989 in response to demand for more recordings from those who had previously bought Mad Waltzing. The cassette also highlighted the acoustic material which was proving popular on the U.K. Folk Club circuit. Twist and Turn features material recorded both in London and Los Angeles and is a mixture of Stereo and Mono recordings. Once again, some tracks from this album eventually found their way on to Laughing in Crime, and it is interesting to hear how they developed over the years. Twist and Turn also contains the only comercially available instrumental recording by Jana in the shape of The Unicorn Tapestries, which features Jana playing an antique celestaphone.

The cassette features the following musicians:

Twist and Turn has recently been released for the first time in the U.S.