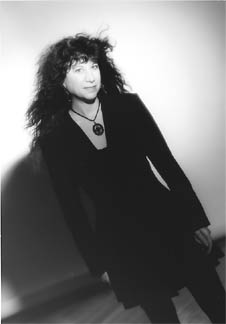 Jana Heller spent fifteen years living and playing in England. There, after producing two independently released cassettes entitled Mad Waltzing and Twist and Turn, she signed in 1995 to Cycle Records and released her first CD Laughing in Crime. The album has received airplay in the UK and across Europe as well as in the United States. It has attracted interest and acclaim from the music press:

Superbly atmospheric or full of thumping clout, Jana Heller is a gal to watch out for. An assured debut, long on style and originality.

Virtuoso dulcimer, fine acoustic guitar, a moving powerful voice and really memorable songs with great hooks. Jana Heller has a product here that could make her a big star - a singer/songwriter a la Kate Bush...this is a brilliant piece of work. A contemporary rock album which sits neatly alongside Springsteen and Alanis Morrisette.

Superb quality and a good familiar feel from start to finish... In the very best tradition of famous contemporary singer-songwriters.

Jana was born in Los Angeles, and played widely around the United States as a solo artist and with her rock bands AAAHS and The Phantoms. She has won American Songwriters' Awards and written music for TV commercials and soundtracks. Her lyrics have been studied as part of a Contemporary Literature course at California State University.

Jana has played at folk clubs and major folk festivals all over the UK, including Cambridge, Gillingham and Monmouth Festivals and the world-famous Bunjie's Folk Cellar. She has shared the bill with acts such as Martin Simpson, June Tabor, Katy Moffatt and the Strawbs. Her music has taken her to the Republic of Ireland and also a tour of festivals, clubs and Universities in Poland. Jana has achieved acclaim in the UK both as a solo performer and in her various bands, which have featured prominent British musicians such as Brian Willoughby (The Strawbs) and Nigel Portman-Smith (Pentangle), and has performed live radio sessions for stations in the UK, Europe and USA.

Jana Heller is a major talent... with a catalogue of stirring songs... with hints of irony and humour.

Jana returned to the Monterey Peninsula in November of 1998 and now plays regularly at venues throughout California with her band Grumbling Ginger. She has appeared on a number of radio stations playing live sessions and giving interviews. Her album has received airplay on several California stations including KAZU, KSCO, KPIG, KKUP and KUSP.

Jana has recently ventured into the world of theatre, appearing as Aunt Eller in Rodgers and Hammerstein's Oklahoma! and as Fraulein Schneider in Kander and Ebb's Cabaret. She also presented Starting Over Again, an autobiographical one-woman show featuing her original music.