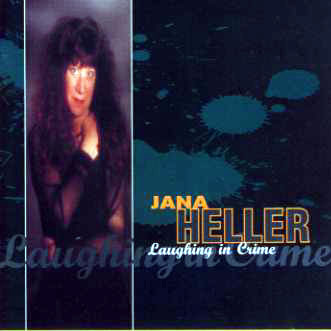 Laughing in Crime is Jana's first release on CD. It was released in 1996 on Cycle Records and launched at the Twelve-Bar Club in London (voted Best Venue for Acoustic Music in 1996). Jana and her band played to a capacity crowd, and were supported by Judith Silver, Suzanne Chawner and poet Tamar Yosselof.

All tracks written by Jana Heller © 1995

Hunger, Mirror, Innocent Ways, (You Could Be) Somebody To Love, Love is a Temporary Thing, Let It Ride, Promise Land, Light The Lamp, Babe all recorded at Swallow Studios, Cheshire UK. Engineered by Andy Blythe.

Laughing in Crime is available from record stores in the U.S. on import: Catalog numbers are Cycle CD003 for compact disc, Cycle C003 for cassette.

The album features the following musicians: